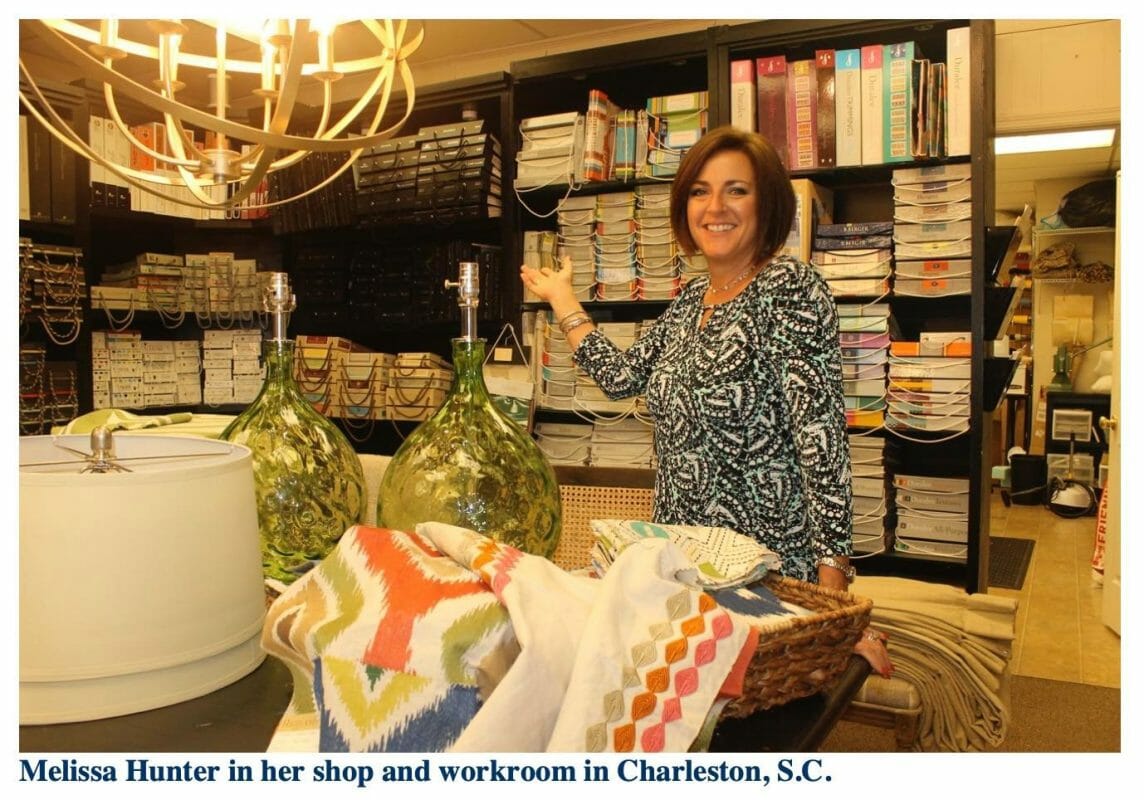 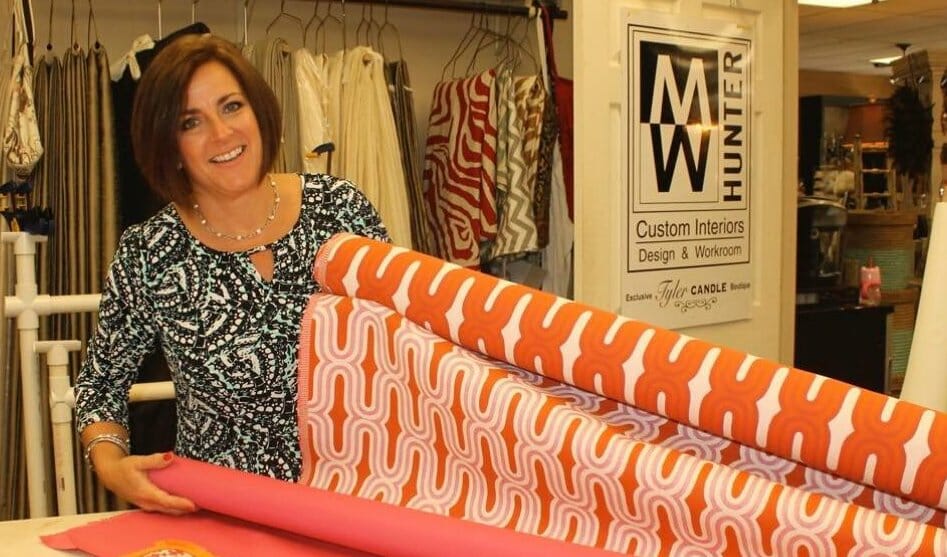 It is with a heavy heart that we announce the passing of long-time Charleston Vendor and treasured collaborator to the South Carolina Film Industry, Melissa Ward Hunter. Melissa lost her 5 year battle with Ovarian Cancer on March 7th, 2022 at just 55 years old. Melissa has been a valued vendor to many Art Directors, Set Decorators and Buyers in Charleston and the southeast region since the late 1990s, creating many lovely window treatments, pillows, bedding, slipcovers and upholstered items for dozens of feature films, television series, and print and magazine ads, in addition to her work for private homes on Kiawah, Sullivan’s Island, and throughout the state of South Carolina.

In memory of our friend and long-time CFA Business Member, we are sharing with you an article and interview with Melissa, originally published in the CFA Newsletter in 2016. At the time, Melissa had served the Film and Television Industry for over 18 years. She continued working until just a few months ago and to date, she had provided her gorgeous designs to the Industry for over 24 years. Some of her most recent projects included, Halloween, Outer Banks for Netflix Seasons 1 & 2, and The Righteous Gemstones for HBO Seasons 1 & 2. She was excited to begin work on Seasons 3 of both shows with the Decorators of each series this Spring.

Her bright spirit always shone as she stayed positive to the very end– what a fighter she was! She will be missed by all who knew her.
-—-—-

Local Charleston vendor, ‘M. W. Hunter Custom Interiors, Lowcountry Gourmet Baskets and Gifts’, has provided custom draperies and décor for movies filming in the Low Country for over 18 years. M.W. Hunter’s namesake is Melissa Hunter, founder and owner of the business. She runs the business with her mother, Iris Rhea, and has a number of Tailors and Drapers that work with her to create the beautiful soft goods that adorn many homes in the area, from Kiawah to Mount Pleasant to West Ashley and beyond!

Melissa started her business in 1998, doing sewing workroom projects. Very shortly thereafter, the feature film Altar Boys with Jodi Foster came into town, and they hired her to make velvet drapes for their gymnasium scene. Right from the start Melissa was doing film work! At that time she was working from home with two small children, so she made the drapes for the movie right at home on her living room floor. Very shortly after that Melissa opened her first “shop”, which was a sewing workroom. She was primarily doing residential projects, but had also become the “go-to” person when films would come to town. She quickly adapted to the fast-paced, “need it yesterday” demands of the film industry, which cemented her reputation with Decorators that would come to town with film, television and commercial projects. She later opened a larger store that included a gift shop and home décor such as custom-made pillows, lamps, candles and decorative items, as her business expanded beyond sewing to include Interior Design which Melissa studied at Winthrop College.

Some of the movies, commercials, and T.V. shows that Melissa has worked with over the years include, Altar Boys, a Veet Commercial with Melissa Milano (She remembers the Decorator, “L.A. Dave”, who was quite the character– He would come in and sit right on top of the worktable, in the middle with his legs crossed, and everything was “Right On, Right On”, followed by a “Hi-5”!), Army Wives, Dear John, Reckless, Identity, South Of Hell, Vice Principals, The Inspectors, Cooking with Chef Bob, staging for the Family Circle Cup, and numerous Pilots, Print and Magazine shoots.

Sometimes the projects included things that she would remake or reconstruct (i.e. re-upholstering chairs or hemming window treatments), and other times she was designing and fabricating pieces from scratch (i.e. a purple ostrich leather headboard for Meena Suvari’s character in South Of Hell). Another grand project that Melissa fabricated from scratch was the Formal and Extravagant Window Treatments for the “Casino” in Army Wives, Season 7. The window treatments were made from the finest silk and flock fabric, and featured Grand Swags and Jabots, installed in the Classic Dining Room at the Woodland’s Plantation.

One season on Army Wives, Catherine Bell’s character Denise Sherwood was redecorating her home and went “shopping” for Home Décor. The show requested “Clearance” from Melissa (M.W. Hunter Custom Interiors) to use her name and logo on shopping bags, and to create a little mini version of her store on the set.

The real thrill came when Melissa heard from one of her Sorority Sisters who happened to be an extra on the set, and got so excited when they handed her friend’s gift bags to carry in the scene, and then saw her products featured on the show! And what a thrill for Melissa to know that her name and work would be viewed by millions of people worldwide!
One of the craziest experiences was when Melissa was hired by Army Wives to create all of the window treatments in “General Clarke’s House” on Sullivan’s Island. She had to make window treatments for the entire house, even including the French Doors in the Kitchen. Due to the demands of the time frame, the scope of the project, and the deadline, Melissa sewed until 4 in the morning, went home to sleep for a couple of hours, then had to be at the set by 7:00 a.m. for the install. And because of all of the beautiful Schumacher fabrics that the show had ordered for these grand window treatments, the Rep from their company was flying into town to take Melissa out to dinner that night. She was exhausted, but also so exhilarated from being on the set and getting to help drape and dress and be involved in all of the excitement.

Melissa just recently decided to expand her business. The company next door (Market Street Munchies) that had been in business for 35+ years, decided they were going to retire. Melissa determined that would be a great loss for the community and for their loyal customers, because the quality of their Traditional, Home-made Bene Wafers, Pralines, Turtles, and Candied Pecans and Roasted Almonds were so delicious and still in great demand. The gorgeous gift bags and baskets they provided to so many local Hotels and commercial accounts were a staple in town and a real symbol of Southern Hospitality. So Melissa set forth to purchase the business, reopening the storefront and propelling the on-line business, as well as honoring all of their long-standing commercial accounts. And the quality of the product remains the same, as the original owners are now just semi-retired and enjoying making all of their delicious goodies for the store from home! And since M.W. Hunter also carries a wide variety of decorative gifts and scented candles (including the very exclusive line of candles, Votivo, popular with many celebrities including Madonna, Rhianna, and Oprah), she can now expand the gift bags and baskets to also include non-edible items, as well.
Gift Bags and Baskets are not new to M.W. Hunter as she often provided “Welcome Baskets” and scented candles to the Army Wives’ Actors and Crew over the years, to say “we want you here—we love the film industry and want you to feel welcome”. This Southern Hospitality was always appreciated and the gesture was not lost on the actors, as many of them bought homes in the area and relocated to Charleston over the years.

Melissa, Iris, and friends at ‘M.W. Hunter Custom Interiors, Low Country Gourmet Baskets and Gifts’, will continue to work with the film and television industry whenever a new project comes to town. They are long-standing supporters of the C.F.A. and the Film Industry, who have helped to contact Senators and our State Representatives with phone calls and letters whenever needed to let our Legislators know how the film industry has impacted their small business. We are proud to have them as members of the C.F.A., and are thankful for the services they provide to the community.
____________________
Memorials in Melissa’s name can be made to:
Charleston Animal Society
2455 Remount Rd.
North Charleston, SC. 29406
charlestonanimalsociety.org
or
Teal Diva
Ovarian Cancer Support
1135 Four Lakes Dr.
Matthews, NC. 28105
tealdiva.org